Deepika Padukone has thanked Alia Bhatt for her ‘next level’ response to Pathaan teaser, which was released on the occasion of Shah Rukh Khan’s birthday.

Alia Bhatt is impressed by the Pathaan teaser, which came out today to celebrate the 57th birthday of Bollywood superstar Shah Rukh Khan. The film, directed by Siddharth Anand, also stars Deepika Padukone and John Abraham. As soon as the teaser was released on the official Yash Raj Films YouTube channel, Alia Bhatt took to her Instagram to praise the film.

Alia, who is currently expecting her first baby with actor Ranbir Kapoor, shared the Pathaan teaser on her Instagram story, writing: “Just next level!!!” Deepika was quick to repost Alia’s story alongside an adorable reply that read, “Thanks, Mom!” Deepika also added a red heart emoji to her answer. Alia previously collaborated with Shah Rukh in Dear Zindagi. 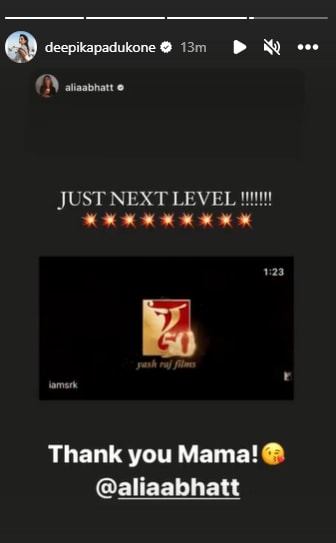 The teaser shows Shah Rukh in a never-before-seen avatar. While Deepika looks nothing less than a Bond Girl. She can also be seen performing a few fight scenes in the video. Part of the teaser also hinted at a possible confrontation between Shah Rukh and John.

Pathaan marks the comeback of Shah Rukh Khan in the lead role after more than four years. He was last seen in 2018’s Zero. The film is slated to release on January 25 next year. The film will be released in Hindi, Tamil and Telugu. The film, directed by Siddharth Anand, was shot in Mumbai, Spain and Dubai, among others. While Deepika Padukone reunites with Shah Rukh and John for the film, this is Shah Rukh’s first film with John.

Shah Rukh Khan will reportedly be seen as RAW agent Feroz Pathaan and he will be joined by former co-star Deepika Padukone in the chases. Pathaan will also feature a cameo from Salman Khan, who is likely to reprise his role as RAW spy Avinash Singh Rathore in the film.