English wheelchair player Joe Coyd looks back on the reaction to the opening win over Australia on Thursday night and looks ahead to the host nation’s next match at the World Cup; England will play against Spain on Sunday at the Copper Box Arena in London (12 noon)

Joe Coyd expected England’s first game of the wheelchair Rugby League World Cup to resonate beyond the sport’s usual crowd, but even he was surprised by how far the 38-8 win over Australia went.

The England squad discovered themselves after the tournament’s victory over the Wheelaroos, watched by a record crowd for a wheelchair match of 3,033 at London’s Copper Box Arena, when they turned on their phones and saw social media lights up and a series of congratulations.

In addition to enjoying a win over one of their old rivals, Coyd was just happy to see so many newcomers to the sport becoming aware of what he and his teammates have known for a long time is an all-action, cheeky yet very skilled spectacle.

“It was remarkable,” Coyd, who plays his club rugby for London Roosters in the wheelchair Super League, told air sports. “I thought there would be a bit of a buzz, but not quite as it was.

“I heard from people I hadn’t spoken to in years that they had come across me on TV and were amazed at what they had seen. I’m glad we put on a good show and people are starting to see what we as players know. a long time already.

“We are blessed to be a part of this. Every World Cup is special, but the way this World Cup has been done with us, the men and the women, is the way to do it, and not just set a tone for rugby league, but for all world tournaments.”

Along with the host nation stepping down from their campaign in style, Thursday’s opening night in London also saw Spain make a name for themselves by beating Ireland 55-32 in the other Group A match as they tried to repeat their knockout stage of the match. World Cup 2017. 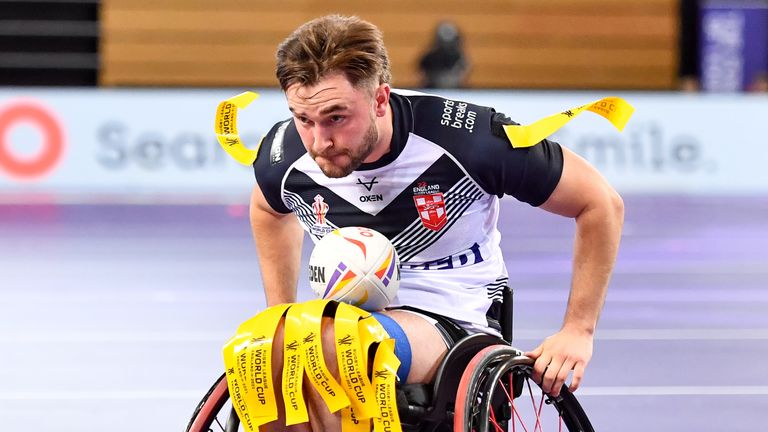 I heard from people I hadn’t spoken to in years that they had seen me on TV and were amazed at what they had seen. I’m glad we put on a good show and people are starting to see what we as players have known for a long time.

Then, on Friday, reigning champions France also showed their skills with a 154-6 victory over Wales, followed by tournament debutants USA who defeated Scotland 62-41 in the Group B double-header in Sheffield.

Coyd is pleased to see some of the less recognized rugby league playing nations such as the Americans and the Spaniards come to the fore in the wheelchair tournament, especially in a year where other nations have done so in the men’s and women’s events held at the same time.

“That’s the magic of the World Cup, isn’t it?” said Coyd. “Look at the guys with Jamaica; me and my brother watched them against New Zealand when Ben Jones-Bishop scored that try and it was like scoring a try in a World Cup final to win it – they were over the moon.

“Brazil, we watched them against the women and although England came out on top, we then saw in the dressing room that they were all singing and dancing and having a good time. Spain was in the last World Cup wheelchair and they are a bit of a stranger and are very good in their seats on the rugby side but the US seemed to crush it in their first game.

“That’s the beauty of the World Cup and I think rugby league in general. It’s always been a sport where no matter what you do, who you are or what you look like, we want you in our sport. a sport for everyone, which is emphasized by the way the World Cup has been done this year.”

Coyd and his team-mates from England who played against the Australians suffered a few bumps and bruises after a physical match on Friday morning, although there will be little time to rest as they face Spain in their second group match in London on Sunday (trap -from 12:00 noon).

However, a swim at the London Aquatic Centre, another former venue for the Olympics, aided their preparations and Coyd’s older brother Tom, England’s head coach, has already identified areas that could also be improved on the pitch to meet their ultimate goal. reaching dethroned champions France.

“We knew they would fight and they did,” Joe said of the win over Australia. “We have some pretty sore bodies and a few bruises on the team – and that’s what we wanted too.

“We wanted to get into the tournament and be tested right from the start to see where we are, and they gave us that. We were very happy with our defense, but our offense has some work to do, and we have some games and some time to get that right.

“We’re still very confident in what we can achieve in this tournament, it’s about getting the timing right and peaking towards the knockout stage.

“Spain looked really menacing at some points and really took it to Ireland. We will have to be ready to go from minute one, building on what we achieved against Australia.”