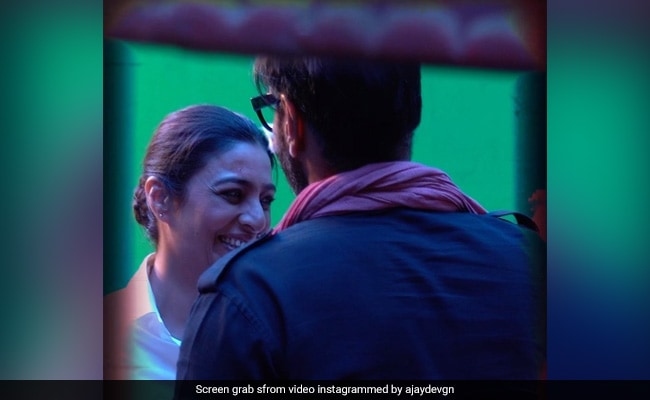 Tabu with Ajay Devgn. (Thanks to: ajaydevgn)

On Tabu’s 52nd birthday on Friday, Ajay Devgn posted a behind-the-scenes video of the sets of their upcoming project along with the title Bhola. The video shows Tabu, with a minor injury on her forehead, smiling away for the camera. Ajay Devgn captioned the video: “Kaaah ghabraaye? (why be afraid) Congratulations Tabu.” He added the hashtag #SetsOfBholaa. He accompanied the video with Mohammed Rafi’s song Sar Jo Tera Chakraye from the movie Pyaasa. Ajay Devgn and Tabu have starred in multiple movies together. The actors have worked together in films such as Golmaal again, De De Pyaar De, Drishyam, Vijaypath, Haqeeqat and Thakshak. Separate from Bholathe duo will also be featured in Drishyam 2 .

This is what Ajay Devgn posted:

Bhola is scheduled for release in March next year. The film is the remake of the Tamil hitKaithi, starring Karthi. Tabu previously announced her association with the film: “Look! We finished our 9th movie together! #wewrap #bholaa.”

Tabu’s filmography is a mix of commercially successful and critically acclaimed films. Maqbool, Maachis, The Namesake, Life Of Pi, AndhaDhun, Haider, Drishyam, Hera Pheri are just a few of her many iconic films. The actress was last seen in Bhool Bhulaiyaa 2starring Kartik Aaryan and Kiara Advani in the lead role.