“I’m terrible at spelling, but…” 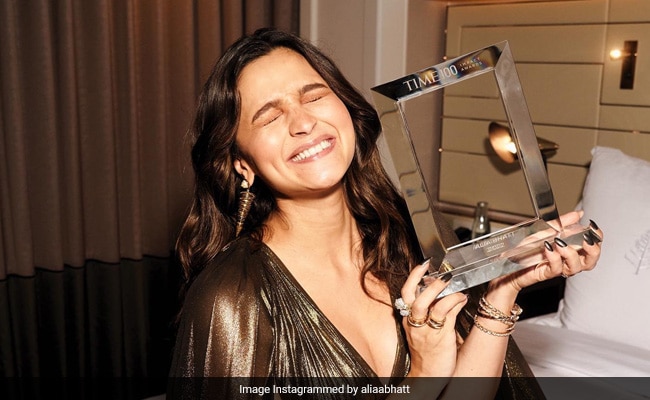 Alia Bhatt was honored with the Time100 Impact Award Sunday at the National Gallery Singapore, where the ceremony took place. The mother-to-be looked gorgeous in a metallic cape dress. The actress was quite vocal about her flaws during her acceptance speech shared by Time. From “being terrible at spelling” to “no sense of geography,” Alia shared it all. But it doesn’t define Alia Bhatt. Agree, right? According to Alia, she has “a deep sense of respect for different cultures” and is emotionally intelligent. For Alia, it’s the ‘flaws’ that matter, because ‘perfection is boring’. This isn’t the first time Alia Bhatt has publicly said she’s bad with spelling. Let’s rewind to June, when the actress misspelled “archaic” and instead wrote “archake” in her post calling for sexist coverage of her pregnancy. But she honestly accepted her mistake. In a subsequent update, Alia wrote: “Archaic * I’m beautiful, but I’m also terrible with my spelling.”

Alia Bhatt said“If it somehow comes to me to lead by example, be a role model or make any kind of impact, I want to do it in the most humane and flawed way possible. Because after all these years I have realized: it is the flaws that make you. Perfection is boring.”

She continued: “Tonight I want to take a moment with all of you to celebrate my shortcomings and my strengths. For example, I’m terrible at spelling. Like, really bad. But I do know what to say to someone who is vulnerable. I I don’t understand geography. Zero. I don’t get directions. But I have a deep sense of respect and respect for different cultures.”

Alia Bhatt added that her “general knowledge is widely known as weak” but that she has worked very hard to cultivate her “emotional intelligence”. Alia is strict with herself about her weight and appearance, but there is one thing she can never say no to: “I tend to be hard on myself regarding my weight and my appearance. But I never say no to fries because, you know, YOLO (you only live once),’ she said at the awards ceremony.

Alia Bhatt added in her speech that she “celebrates flawed people through her movies and characters”. She said, ‘Because ultimately it’s the imperfections that make a character attractive. So what I’m trying to say is that being yourself is really the biggest impact you can make. In the movies and in life you don’t have to be perfect; you just have to bring everything you’ve got – the lows, the highs and the real things that we’re actually afraid to talk about. There is no greater impact than being yourself.”

The actress concluded her acceptance speech with a thank you to her family, husband Ranbir Kapoor and an adorable mention of her baby. “But for now, tonight, this award has really impressed me – me and my little one, who kicked me relentlessly during this speech. Thank you so much,” she said at the end of her speech.

Alia Bhatt announced last week that she will win the Time100 Impact Award. She shared a screenshot of Time’s essay, in which they described her as a “modern woman” with “flaws and all,” and added sun icons to the caption.

Alia Bhatt is known for her appearances in films like Highway, Raazi, Gangubai Kathiawadic and Gully Boywill be featured next in Rocky Aur Rani Ki Prem Kahani. She will also make her Hollywood debut with Tom Harper’s Heart of stone.