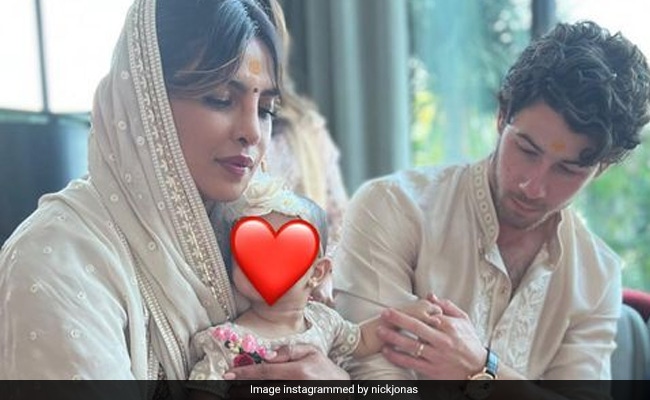 Priyanka Chopra and Nick Jonas’ Diwali was extra special this year as they celebrated the festival of lights with their daughter Malti Marie, whom they welcomed earlier this year. Nick Jonas shared beautiful photos of the Diwali festivities from their home in Los Angeles. In the photos, the star couple can be seen posing with daughter Malti Marie. The family of three can be seen dressed in matching white outfits. The singer captioned the post: “Such a beautiful Diwali celebration with my love. Happy Diwali everyone. Sending joy and light to all of you. #diwali.” In the comment section, Priyanka Chopra dropped a heart-eyed emoji.

Priyanka Chopra and Nick Jonas welcomed a daughter via surrogacy this year. When announcing the arrival of their baby, the star couple shared a statement in January. The statement read: “We are overjoyed to confirm that we have welcomed a baby through a surrogate mother. We respectfully ask for privacy during this special time while we focus on our family. Thank you very much.”

Priyanka Chopra and Nick Jonas met at the big fashion event Met Gala 2017, where they represented designer Ralph Lauren. The singer had closed an entire Tiffany’s store in New York to pick out Priyanka Chopra’s ring. He had proposed to Priyanka on her birthday while on holiday in London. They got married at the Umaid Bhawan Palace in 2018.

At work, Priyanka will star in the Hollywood movie It all comes back to me with Sam Heughan. It will be released before Valentine’s Day 2023. The actress can also be seen in Russo Brothers’ Citadel. Priyanka Chopra was last seen in Matrix 4which was released in December last year.