Shilpa Shetty can train in any outfit. Here’s the proof 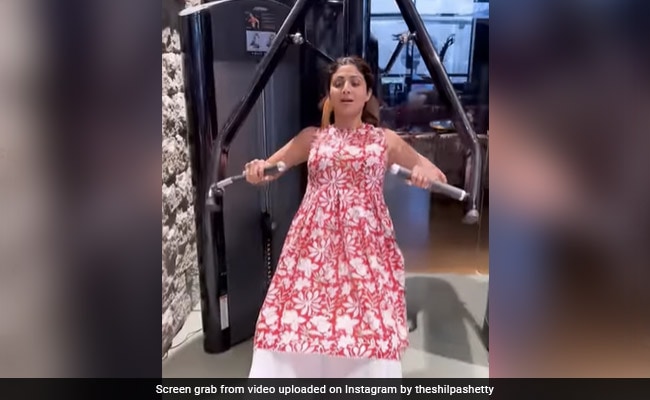 Shilpa Shetty in a still from the video. (courtesy: theshilpashetty)

Shilpa Shetty is back with her Monday Motivation. FYI, it’s a training video. The actress, in a breezy salwar kameez set, performs the shoulder strengthening exercise. Referring to her gym outfit, one can hear her say:Outfit size dekho…Emotion ko samjho. Get fit in any outfit.Well said, Shilpa Shetty. The actress who broke her leg on the sets of Rohit Shetty’s Indian Police in August, adding:Couple tuta hai, hath nahi”. After completing the set, the actress shows off her biceps and takes a cool pose in front of the lens. Along with the clip, Shilpa Shetty wrote, “Motivation for today’s Monday: get fit in any outfit. (It’s Navratri, remember)”

Shilpa Shetty added: “To start with, I practiced the Seated Chest Press Equipment, mainly working the shoulders and strengthening and developing the pectorals and triceps.”

Emphasizing the importance of the exercise, the actress said: “It’s important to keep the shoulders pressed; elbows, aligned with the chest, slightly pointing down, as you can see in the video. A mistake many make is that most of them shrug and are unable to keep their elbows in line with the chest. To get it right, remember this hack: keep elbows parallel to the handlebars. You will never go wrong with this. Keep your body tight and don’t slack.”

Shilpa Shetty finally debunked a myth: “I also wanted to break the myth that women don’t need to train Chest. Do 3 sets of 12 reps.” View her message here.

Shilpa Shetty takes her fitness routine seriously and there is plenty of evidence on her Instagram page. When it comes to fitness, she wholeheartedly follows this policy: “Keep moving. It doesn’t matter what.” Proof? In one of her previous Motivation posts on Monday, she is seen in the gym with her injured leg. An excerpt from her caption read: “To make good use of the time I have while my leg needs time to fully recover, I decided to make sure I’m following a routine that works to strengthen the upper body.”

In terms of work, Shilpa Shetty is all set to make her digital debut alongside Sidharth Malhotra in Rohit Shetty’s Indian Police. It will premiere on Prime Video.