Rapper Yo Yo Honey Singh shared a post after his friend, singer Amanjot Singh, aka Alfaaz Singh, was injured and hospitalized after an altercation at a dhaba (eatery) in Punjab. Alfaaz was hit at a pick-up pace after an altercation broke out between him, the restaurant owner and the suspect on Landran-Banur Road in Mohali.

According to reports, the singer came from the Pal Dhaba after having dinner with his friends on Sunday night. An argument took place between the suspect Vicky and the restaurant owner over money matters. He requested Alfaaz to mediate and then attempted to flee at a pace that belonged to the dhaba owner. He hit Alfaaz, who was seriously injured. Vicky has been reported to the Sohana Police Station.

Honey Singh confirmed the same on his Instagram handle, writing: “My brother @itsaslialfaaz was attacked last night.” However, he later deleted the message. 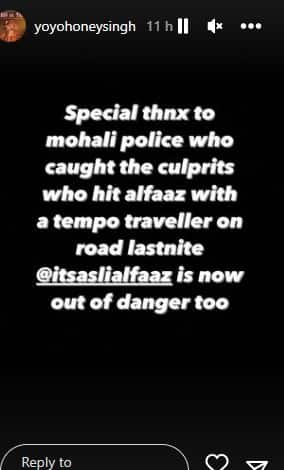 According to Honey Singh, the perpetrators beat Alfaaz with a tempo traveler while trying to flee from the dhaba. In another post, he wrote: “I just came to @itsaslialfaaz in the hospital. He is still in serious ICU. Please pray for him.” The injured singer is being treated at Fortis Hospital in Mohali.

He later thanked Mohali police and gave an update on Alfaaz’s health. He wrote in an Instagram story: “Special thanks to the Mohali police who caught the perpetrators who hit Alfaaz with a speed traveler on the road last night. Alfaaz is also now out of danger.”

According to a report by The Indian Express, Alfaaz made his statement to the police saying that he was at the dhaba with his friends. Teji, Kuljit and Gurpreet, when Vicky, a former employee, tried to steal the pace from the dhaba owner. Vicky didn’t notice the singer, who was behind the pace and bumped into him when backing up.

Police authorities have registered a case against the accused under Sections 279, 337 and 338 of the Indian Penal Code (IPC) at Sohana Police Station. The Sohana Station House Officer said, “We have recovered the vehicle and arrested the accused.”

Honey Singh considers Alfaaz his brother and the duo have collaborated on songs like Haye Mera Dil, Birthday Bash and Bebo among others.