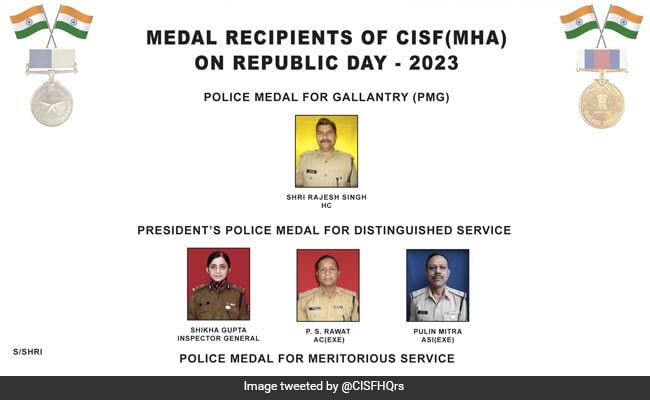 A Jawan of the Central Industrial Security Force who “overpowered” his armed colleague after the latter allegedly killed four personnel at a power station in Bihar in 2017 has been awarded the Police Medal for Bravery (PMG) to mark the 74th Republic Day .

Officials said this is one of the rare times a PMG has been given to personnel who showed courage to end a fragmentation incident.

Constable Balveer Singh reached the roof of the new campus barracks and was “challenged” by Rajesh Singh, who was unarmed, the CISF said in a statement.

“Knowing that Officer Balveer Singh was in a fit of rage and carrying a deadly assault weapon and it could result in the loss of his life, Rajesh Singh with sheer sense of determination and to save life, confronted Balveer Singh and snatched the INSAS shotgun and threw it, disarming him,” police said. He also overpowered Officer Balveer Singh and pinned him to the ground, which was later handed over to local police, the CISF said.

DG #CISF and all ranks congratulate all medal recipients.#PROTECTIONandSAFETY#PRIDE#HONORpic.twitter.com/BGfiO7Y3ij

Police said Rajesh Singh’s “act of bravery and bravery” saved many precious lives at a time when others ran to save their lives.

The PMG, according to his citation, is being awarded for his “conspicuous gallant action, bravery and devotion to duty during a major random shooting incident while posted to CISF Unit NPGCL Nabinagar at the time of the incident.”

The CISF unit is deployed to the NPGCL, a wholly owned subsidiary of NTPC Limited, to provide it with counter-terrorism coverage against Maoists and similar extremist elements.