The first contingent in the uniform of the 61st Cavalry was led by Captain Raizada Shaurya Bali.

As India celebrated its 74th Republic Day today, Kartavya Path in the national capital witnessed the prowess of the armed forces, armored with hi-tech indigenous-made equipment.

The 2023 Republic Parade started with a march of a contingent of the Egyptian Armed Forces.

The first contingent in the uniform of the 61st Cavalry was led by Captain Raizada Shaurya Bali. The 61 Cavalry is the only serving active Horse Cavalry Regiment in the world, with the amalgamation of all ‘State Horse Units’.

The Indian Armed Forces have rendered their selfless service to the nation and its compatriots, ensuring stability and dominance at the borders along the Line of Control (LoC), the Line of Actual Control (LAC) and globally through UN peacekeeping missions.

The lethality, accuracy and reliability of the Indian Army took a major leap with the acquisition of platforms such as the Akash missile system, satellites, modular bridges, towed guns, helicopters, electronic warfare systems and the like surface-to-air missiles. 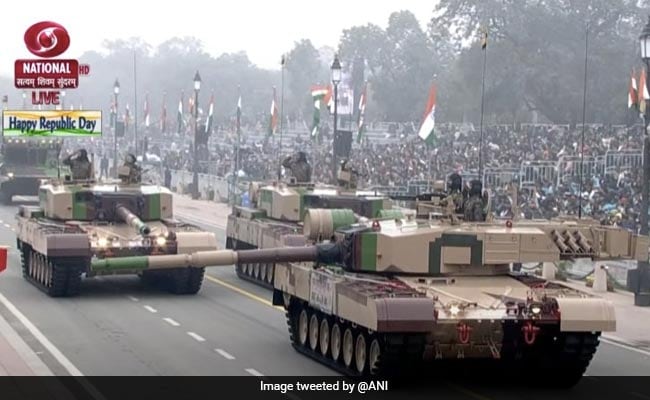 Arjun features a 120mm rifled main gun, 7.62mm coaxial machine gun and a 12.7mm anti-aircraft machine gun. It is powered by a 1400 hp diesel engine and can reach a maximum speed of 70 km/h (43 mph) and an off-road speed of 40 km/h (25 mph). The newly developed Kanchan armor provides all-round anti-tank warhead protection far beyond that available in comparable third-generation tanks. The motto is motto ‘Sahasam Vijayate’.

The next detachment was from NAG Missile System of 17 Mechanized Infantry Regiment under Lt. Siddhartha Tyagi. The system popularly referred to as NAMIS is a tank destroyer originally designed by the Defense Research & Development Laboratory Hyderabad, a laboratory of DRDO. It consists of a tracked armored fighting vehicle, which has an unmanned gun turret capable of firing six ‘Nag’ anti-tank guided missiles. NAMIS has been developed for the reconnaissance and support units of the mechanized infantry to strengthen and improve the anti-tank capability along our borders during offensive and defensive operations. 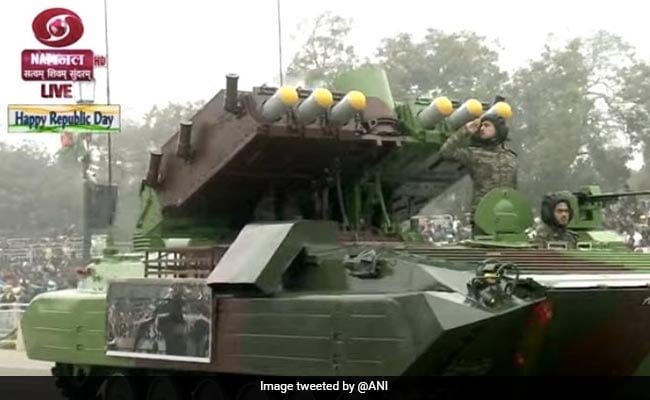 The Nag missile is a Fire & Forget ATGM with an effective range of 5 km. The tandem missile warhead with the ability to lock for launch and top attack accurately hits the targets that move or try to escape.

NAMIS is a game-changer and the successful development of this modern weapon system for the Indian Army has propelled India into the select club of countries that have developed their own fire-and-forget tactical apex attack ATGMs integrated into armored vehicles. The motto is ‘Satrah Mech – Har Maidan Fateh’.

ICV BMP-2, called SARATH, is a high mobility infantry fighting vehicle (ICV) that features lethal weapons and night combat. It can operate effectively in all battlefield terrains of desert, mountainous area or high altitude area. The motto is ‘Courage and Faith’ which means (Veerta our Vishwas’).

The next detachment was from Quick Reaction Fighting Vehicle under Captain Naveen Dhatterwal of 3 Ladakh Scouts Regiment. These vehicles under Atma Nirbhar Bharat Scheme are manufactured by TATA Advance System and Bharat Forge Limited for the Indian Army and are a shining example of the Indian Army’s quest for self-reliance. This 4×4 wheeled armored platform has full armor protection with a 360-degree turret mounting a 7.62mm medium machine gun and can carry 10 fully armed troops. The vehicle is ideally designed for forces operating in Ladakh, Sikkim and Arunachal Pradesh. 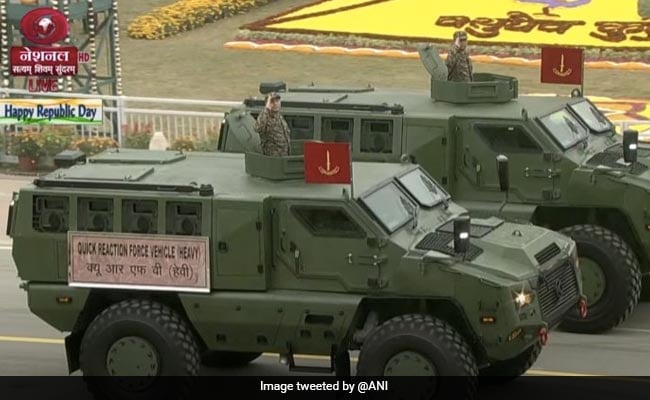 The vehicle is also mine and bullet resistant, making it suitable as an escort vehicle and special response for CI OPS. It has a maximum speed of 80 km/h with an OP range of up to 600 km and can handle a slope of up to 25 degrees. The battle cry is “Ki Ki So So Lahargyalo” which means ‘Victory to God’.

The next detachment was from K9 Vajra-T of 224 Medium Regiment (Self Propelled) under Lieutenant Prakhar Tiwari. K9 Vajra-T 155mm/52 Caliber Tracked Self Propelled has a firing range of 40km.

The tracked self-propelled gun system can travel at a maximum speed of 60 km/h across arid desert terrain. It features all welded steel armor protection and the design incorporates Modular Azimuth Position System (MAPS) and Automatic Fire Control System. The motto is Sarvada Sarva Pratham’ which means ‘Always the First’.

The next detachment was from Brahmos of 861 Missile Regiment under Lieutenant Prajjwal Kala. BRAHMOS is a supersonic, high-accuracy cruise missile with a range of 400 km and the ability to hit targets deep in enemy territory with precision and devastating effect. The motto is “Swamiye Sarnam Aiyyapa”. 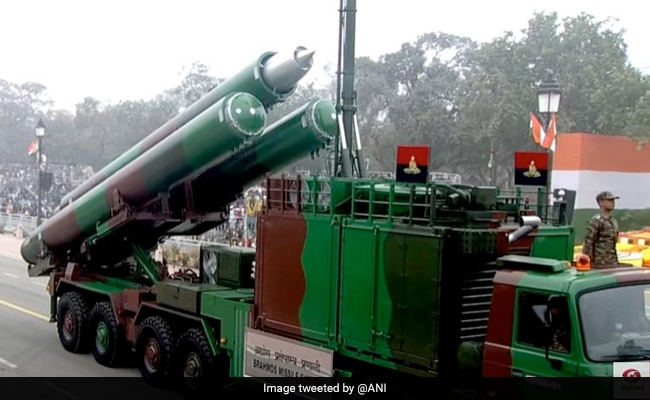 The 10 meter short span bridge of 64 Assault Engineer Regiment under the command of Captain Shivashish Solanki, it is a mechanically launched Assault Bridge designed by DRDO to help Combat Engineers cross formidable obstacles like Canal of Nallahs in minutes. The motto of 10 Meter Short Span Bridge System was Agrani Ajay’ which means ‘Always Leading and Invincible’.

These bridges can be used by mechanized and armored columns to quickly cross obstacles and destroy the enemy. These native bridges mean that no barriers remain for the Mechanized

Forces of the Indian Army and are moving forward towards Atmanirbharta in defence. The regiment celebrates 50 years of glorious history on September 30, 2023.

The Node is mounted on a High Mobility Vehicle platform and housed in an NBC-resistant ruggedized enclosure to provide matched mobility and power for mobile mechanized operations. The vehicle can operate on optical, microwave and satellite media to provide triple play services including voice, data and video for field formations in active hostilities.

The Mobile Network Center is a next-generation network vehicle and enables network-centric operations.

It houses three core functionalities of Network Operations, Security Operations and the Data Center. It acts as a force multiplier by increasing transparency on the battlefield and increasing situational awareness.

The vehicle has a six-person crew led by an officer and is equipped with an IMS core, aggregation router access switches, large display screens and high-speed processing platforms. The mobile node is indigenously developed and supports the Aatmanirbhar Bharat mission.

The next detachment is from the AKASH weapons system of 27 Air Defense Missile Regiment – ‘the Amritsar Airfield’, led by Captain Sunil Dasharathe accompanied by Lieutenant Chetana Sharma of 512 Light AD Missile Regiment (SP). 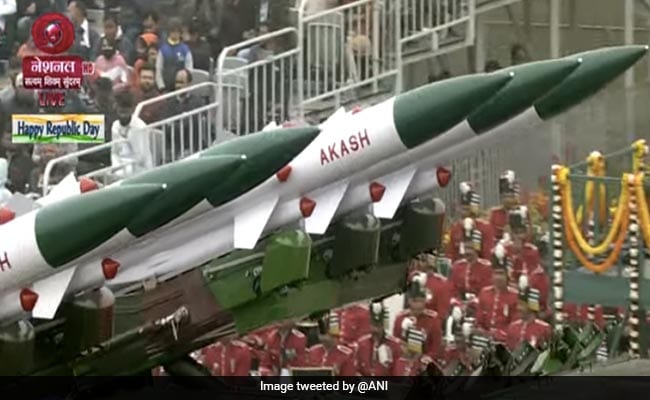 WhAP is a modular combat platform with 8×8 wheels. WhAP is a state-of-the-art customizable platform for infantry vehicle, CBRN vehicle, ATGM carrier, etc. roles. The armored personnel carrier variant shown is integrated with a 30mm gun turret, composite armor and innovative blast protection. This amphibious vehicle can cross rivers and canals and the maximum speed on the road is 100 km/h.

The 70-tonne trailer is equipped with state-of-the-art hydraulic suspension for better mobility, steerable axles and a hydraulic ramp to facilitate loading and unloading of heavy loads. The trailer, which can handle sharp turns and slopes, has undergone extensive testing with MBT Arjun as the payload.

The defense services, in particular, witnessed pioneering reforms to transform the military into a modern, self-reliant, youthful and tech-savvy force.

The seamless modernization plan focused on developing ‘Force Capabilities’, creating a self-reliant defense ecosystem with Make in India pursuit and a learning and agile army driven by technology.