At least seven national parties have received Rs 778.73 crore in contribution of more than Rs 20,000 from individual donors and entities in FY 2021-22 with Bharatiya Janata Party (BJP) and Congress accounting for more than 90% of the proportion, Data from the Election Commission (EC) analyzed by CNN-News18 shows. While the BJP raked in the highest amount of donations (Rs 614.52 crore), the BSP was at the other end of the spectrum with zero donations. .

In its report to the Election Commission, the BSP said it received “zero” contributions of more than Rs 20,000 during 2020-2021. This has been the position of the BSP for more than a decade and a half. receives money from low-income people. 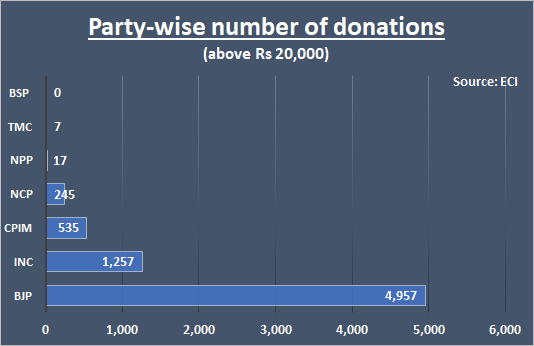 In terms of number of donations, the BJP is at the top. It got more than Rs 614.52 crore from 4,957 donations. The Congress was second on the list with Rs 95.45 crore declared from 1,257 donations. Clubbed together, these two parties alone account for more than 90% of the total contributions reported by the seven national parties. NCP ABOVE THE CHART IN AVERAGE CONTRIBUTION PER DONOR The NCP also reported the highest jump in donations from 2020-21. Further, when compared to the donations received by these national parties in the previous fiscal year (2020-21), the contributions received by the BJP, Congress, NCP and AITC have increased while those of the NPP and CPM have decreased , the data shows.

Political parties must declare donations received above Rs 20,000 annually to the Election Commission.