Former Pakistani Prime Minister Imran Khan has revealed details about his shooting during a protest rally.

Khan was shot four times on Thursday, with two bullets hitting each of his legs, during a protest march in Pakistan.

He said there was a fracture in his right leg and there were some bullet fragments near the main artery.

“If it had gotten there, there would have been a lot of blood,” he said.

“We got these four bullet fragments out, but they didn’t hit any major structures.”

He added: “Once I recover, I will be back on the streets.”

Khan said that two gunmen tried to kill him and that they killed one person and injured 11 others.

He said three people had planned to kill him, but gave no names and provided no evidence for his accusations.

The former prime minister gave an interview to Sky News two hours before he was shot in which he said he hoped there would be no violence as he marched across the country.

Footage of the scene captured what local media are citing as the gunman, who appeared to escape when members of the public tried to take the weapon from him.

Police are questioning the alleged attacker, who appeared in a video and said he carried out the shooting and acted alone. 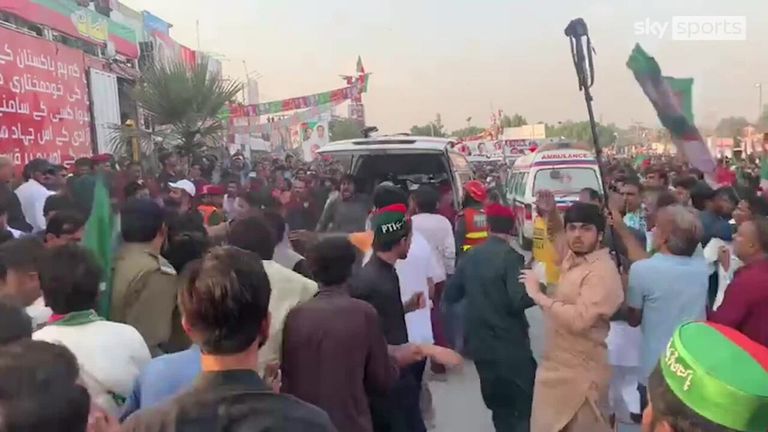 Imran Khan was shot and wounded in the leg after an attack on his protest march in the eastern city of Wazirabad. Viewer discretion: Following disturbing scenes

The cricketing hero turned politician – who has called for new elections since he was ousted from power in April – delivers impassioned speeches at rallies across the country.

He had been marching from Lahore to Islamabad for six days in his pursuit of radical change when the shooting happened.

Before entering politics, Khan had a brilliant two-decade cricket career with Pakistan, after making his first-class debut at the age of 16.

Khan played county cricket for Worcestershire between 1971 and 1976, making his Test debut against England in June 1971 at Edgbaston.

In 1974 he made his ODI debut against England at Trent Bridge. In the 1970s he established himself as one of the fastest bowlers in the world of cricket and one of the pioneers of reverse swing bowling.

In 1982, Khan became captain of the Pakistan cricket team at the age of 31, taking over from Javed Miandad.

The fast bowler retired from international cricket after leading Pakistan to victory in the 1987 World Cup, but returned to the side a year later.

Khan’s career as a captain and cricketer came when he led Pakistan to victory in the 1992 Cricket World Cup.