The Washington Commanders travel to the Chicago Bears on Thursday night in the midst of a four-loss streak and with serious questions for their quarterback — even from their own head coach.

Carson Wentz arrived in Washington this off-season via trade from the Indianapolis Colts. He has averaged 278 pass yards per game so far this season, throwing 10 touchdowns to six interceptions. It’s far from a terrible stat line, but the Commanders are 1-4 for the first five weeks, losing four in a row since an opening weekend win over the Jacksonville Jaguars.

When asked earlier this week why other NFC East teams (all 4-1 or better) are ahead of Washington in the division on this point, head coach Ron Rivera replied, “Quarterback.

However, Rivera added that despite the team’s struggles, he did not regret the trade for Wentz and has since apologized for his comments.

“No, I don’t regret that quarterback,” he said. “I think our quarterback has done some good things. There have been a few games that he struggled with.” Highlights of the Tennessee Titans against Washington Commanders in week five of the NFL season.

Highlights of the Tennessee Titans against Washington Commanders in week five of the NFL season.

Rivera later added: “I had a ‘mea culpa’ moment and I should have known better.

“I created a little distraction and that’s one thing I try not to do, and it’s something I’m very aware of.”

Wentz passed 25-of-38, threw for 359 yards and two touchdowns, along with one interception — including a 75-yard TD to Dyami Brown — while the Commanders went down 21-17 at home to the Titans on Sunday. 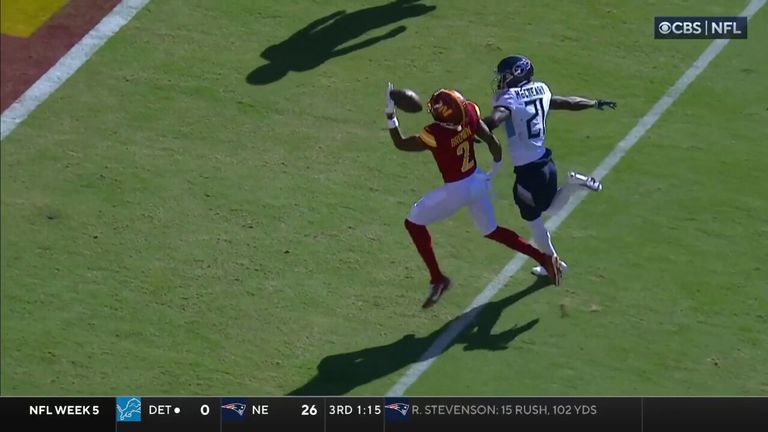 Dyami Brown made a stunning one-handed catch for Washington Commanders against the Tennessee Titans.

Dyami Brown made a stunning one-handed catch for Washington Commanders against the Tennessee Titans.

The 29-year-old quarterback seemed pleased with his coach’s explanation, telling reporters, “The coach handled it, handled it.

“The coach is a very direct, open guy. He talked about it in a team meeting, what I thought was really cool and what he meant by it. I’m very confident in it.

“Nothing for me that I worry too much about.”

‘Wentz is a scapegoat | Not the commander’s number 1 problem

2nd overall pick in the 2016 NFL Draft, Wentz had five seasons with injuries with the Philadelphia Eagles before being traded to the Colts, where he only lasted one year as the team failed to make the playoffs with a record of 9-8.

“Maybe I’m missing something. There were problems with him in Philadelphia and we know there were problems in Indianapolis. Maybe that’s still real? Maybe he’s not a good locker room boy and a good leader of your football team.”

“But Carson Wentz is not this team’s problem. Has he been perfect? ​​No. But they don’t have an attacking line, they are completely overrun all the time; they can’t run football either.

“And their defense isn’t really worth it. They have five first round draft picks in their front seven, but they can’t get anything done and he is a defensive coach.

“I’m throwing the challenge flag on everything. Hey [Wentz] is a scapegoat.”

Simms added: “Good for him [Rivera] to acknowledge that he shouldn’t have said that and discussed that with his team – that’s the right thing to do. I give him credit.

‘But still, the damage was done. He opened the door slightly for the “let’s hope for Wentz” conversation. And that’s where it went wrong.’

Wentz now has the crucial chance to get Washington win again on Thursday night against a 2-3 Bears outfit that has also had their battles this season.

It has been confirmed that Wentz will start the game despite an injury to the biceps tendon near his throwing shoulder that has raised questions about his availability on a short week.

The commanders had listed Wentz as a “limited participant” in training on Monday and Tuesday, but upgraded him to “full participant” on Wednesday, removing him from the final injury report.

Share
Facebook
Twitter
Pinterest
WhatsApp
Previous articleHeirs of the richest Turks are investing fortunes in technology at the riskiest moment
Next articleHoroscope today, October 14, 2022: Here are the astrological predictions for your zodiac signs | News