Mikaela Mayer predicted the performance of a lifetime, as Alycia Baumgardner vowed to silence her opponent before the pair had to be split again by security in their face-off ahead of Saturday’s Fight of the Night contender at The O2 .

The American rivals had come to blows during a media taping the day before when Baumgardner suggested she didn’t have the same “resources” as Mayer during their early boxing career.

Mayer tried to quash that story in response, and during Thursday’s press conference, she highlighted her success as the reason for her opponent’s distaste for her amid their fiery feud. 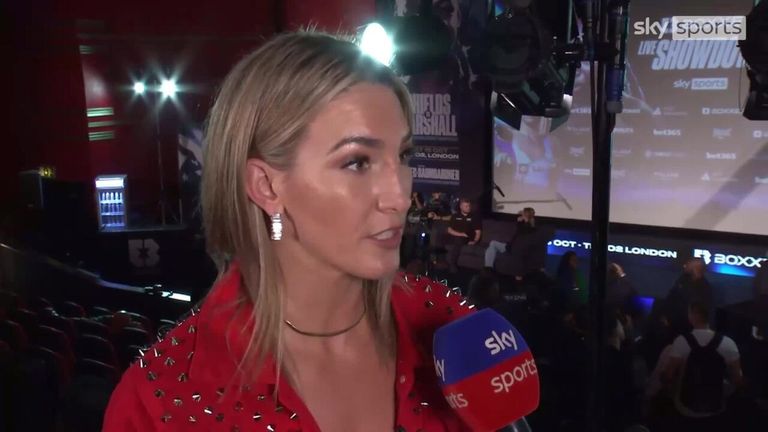 “She doesn’t have much to lose, she just came on the scene,” Mayer said. “If she goes somewhere, no one will miss her.

“She knows my name and has been coming for my name for a long time. I’ve worked extremely hard to get to this position and I won’t let her take that away from me.”

Baumgardner insisted she had no respect for Mayer, suggesting that her standout win over Terri Harper was “just a fraction of who I am”. “There is a difference, my confidence is triggered by her,” added Baumgardner. “Every one of her fighters she’s fought against has come to fight her and go back home.

“This is trust we’re dealing with. I’m a competitor at heart, I’ve been doing this since I was eight and I’m excited.”

Baumgardner has been critical of Mayer during the extended build-up to their super-featherweight unification fight, citing her opponent’s presumed lack of progression.

“She said a lot of things, boring, flat-footed, they look the same as the amateurs, to me that just shows her ring IQ,” Mayer said. “I know I’m constantly improving, when I go to camps with my coaches, we’re constantly trying to get better, her ring IQ is clearly not as high as she says it is. “I expect the performance of my life. Contrary to what she says I haven’t developed, it’s not true. I still feel like I haven’t reached my peak.

“I want to embarrass her and make her sound stupid. Like me or not, on paper I’m her absolute biggest test. I’m a multiple world champion, Olympian, she hasn’t fought anyone with my resume. She has to accept that.”

Baumgardner suggested beforehand that the knowledge she will lose was “a hard pill to swallow” for Mayer.

“That’s great, all those trappings, but it doesn’t matter, Saturday night, because a fighter like me will beat that and it’ll embarrass her that someone who came out of the woodwork and became a world champion doesn’t have experience, going to beat her, that’s great,” she continued.

“If someone talks too much, you have to silence them. On Saturday night.’