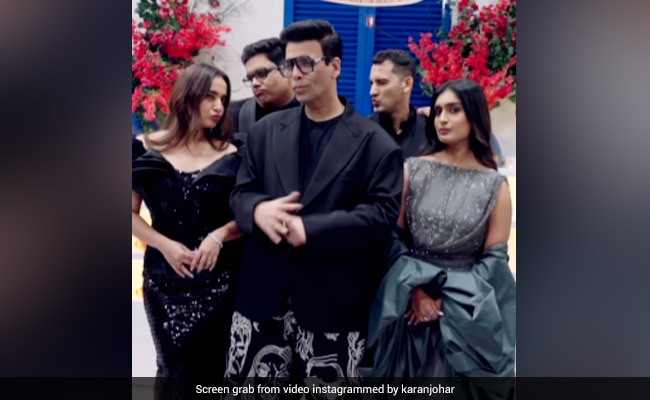 If you think you need to beat the pouting game, join Karan Johar’s ‘masterclass’. The filmmaker, whose pouting game is better than others (excluding OG Kareena Kapoor, of course), shared a guide to nailing it in 3-4 easy steps. Oh, and don’t forget – sass is a must. Karan Johar, who concluded the seventh season of his popular talk show Coffee With Karan with a hit finale, Kusha invited Kapila, Niharika NM, Tanmay Bhat and Danish Sait as guests. They were also his students for the pout master class. Sharing a roll with the quartet of the KWK set, KJo wrote, “Just a quick masterclass with the most masterful kids in town — so there’s never a bad selfie again.”

Karan Johar, in the Instagram Reels, introduces us to his class for the first time. “This is our pout masterclass. Guys, ready?” he asks Kusha Kapila, Tanmay Bhat, Danish Sait and Niharika NM standing behind him. Step by step, KJo teaches them the art of pouting. “Step 1- Close your eyes. Lips out, pout. Tilt head. Feel fantastic,” he says. In the next moments, the focus shifts to Kusha and Niharika NM, who burst out laughing. Tanmay stole the spotlight with his epic expression.

In the latest episode of Coffee With Karan 7, Niharika NM, Kusha Kapila, Tanmay Bhat and Danish Sait made Karan Johar reveal many secrets and jokes. From Sara Ali Khan-Janhvi Kapoor’s quick joke to still being afraid of his mother and his battle with fear, KJo shared it all.

Near the end of the episode, Karan Johar was also teasing his fans about season 8 of his show. According to the filmmaker KWK 8 will premiere next year. How excited are you? Tell us in the comments section.