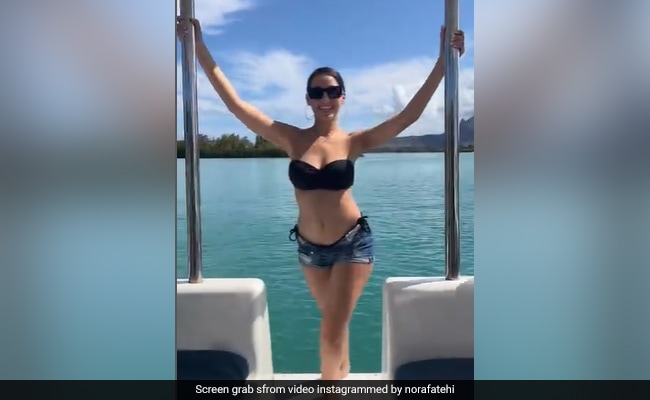 We all know that Nora Fatehi loves to travel, and her trip to Mauritius last month was proof of that. Now Nora has stated that she “belongs to the beach.” She has shared a montage with herself and friends, including Anup Surve, chilling out on a yacht in the middle of the sea. In the video, she is busy clicking pictures and dancing with Anup. In between, she also says, “Ali, I want to jump into the sea”, and jumps into the water. Nora, dressed in a black bralette, jeans and black sunglasses, was indeed having the time of her life. Her caption read, “Take me back. I belong on the beach..”

A few weeks ago, Nora Fatehi shared a glimpse of her gateway to Mauritius. She looks beautiful in her beachwear. Nora’s side note read “Vibe” with dolphin emojis.

Before that, Nora Fatehi treated us to another fun video of her journey. In it she can be seen grooving to the tones of call me every day, by Chris Brown. Seeing Nora clad in a chic pink bralette and blue shorts dancing effortlessly on a beach is a sight to behold. She was joined here by Anup Surve, choreographer Rajit Dev and makeup artist Marce Pedrozo. “Vibing…Call me every day,” she wrote.

Nora Fatehi recently launched the light the sky soundtrack and let’s agree, she looked amazing. For the caption, she said: “And it’s out. The official soundtrack of FIFA World Cup 2022 light the sky, produced by RedOne (Moroccan-Swedish singer-producer).” Nora, who has Moroccan roots, exclaimed to her fellow performers: “Shout out to the beautiful girls Balqees Fathi, Manal Benchlikha and Rahma Riad for their representation. Girl power.”

On the work front, Nora Fatehi is currently seen as a judge on the reality show Jhalak Dikhhla Jaa 10, alongside Madhuri Dixit and Karan Johar. She left everyone in awe with her performance in the Hindi remake of the Sri Lankan song Manike.